Fuel cells generate electricity by an electrochemical reaction in which oxygen and a hydrogen-rich fuel combine to form water. Unlike internal combustion engines, the fuel is not combusted, the energy instead being released electrocatalytically. This allows fuel cells to be highly energy efficient, especially if the heat produced by the reaction is also harnessed for space heating, hot water or to drive refrigeration cycles.

There are several different types of fuel cell, but they are all based around a central design. A fuel cell unit consists of a stack, which is composed of several individual cells. Each cell within the stack has two electrodes, one positive and one negative, called the cathode and the anode. The reactions that produce electricity take place at the electrodes. Every fuel cell also has either a solid or a liquid electrolyte, which carries ions from one electrode to the other, and a catalyst, which accelerates the reactions at the electrodes. The electrolyte plays a key role – it must permit only the appropriate ions to pass between the electrodes. If free electrons or other substances travel through the electrolyte, they disrupt the chemical reaction and lower the efficiency of the cell.

Fuel cells are generally classified according to the nature of the electrolyte (except for direct methanol fuel cells which are named for their ability to use methanol as a fuel), each type requiring particular materials and fuel. Each fuel cell type also has its own operational characteristics, offering advantages to particular applications. This makes fuel cells a very versatile technology. As a result, fuel cells have a broader range of application than any other currently available power source – from toys to large power plants, from vehicles to mobile chargers, and from household power to battlefield power.

A fuel cell is a device that uses hydrogen (or hydrogen-rich fuel) and oxygen to create electricity. Fuel cells are more energy-efficient than combustion engines and the hydrogen used to power them can come from a variety of sources. If pure hydrogen is used as a fuel, fuel cells emit only heat and water, eliminating concerns about air pollutants or greenhouse gases.

Once produced, hydrogen generates electrical power in a fuel cell, emitting only water vapor and warm air. It holds promise for growth in both the stationary and transportation energy sectors. Hydrogen can be produced from resources like natural gas, coal, solar energy, wind, and biomass. Hydrogen-powered fuel cell electric vehicles emit none of harmful substances. Their only emissions are water (H2O) and warm air. The environmental and health benefits are also seen at the source of hydrogen production if derived from low- or zero-emission sources, such as solar, wind, and nuclear energy and fossil fuels with advanced emission controls and carbon sequestration.

Hydrogen’s energy content by volume is low. This makes storing hydrogen a challenge because it requires high pressures, low temperatures, or chemical processes to be stored compactly. Overcoming this challenge is important for light-duty vehicles because they often have limited size and weight capacity for fuel storage. The storage capacity for hydrogen in light-duty vehicles should enable a driving range of more than 300 miles to meet consumer needs. Because hydrogen has a low volumetric energy density compared to gasoline, storing this much hydrogen on a vehicle currently requires a larger tank than what is equipped on most conventional vehicles. To be competitive in the marketplace, the cost of fuel cells will have to decrease substantially without compromising vehicle performance. The cost to build and maintain hydrogen stations also needs to decrease for the market to be able to support a hydrogen economy. (Source:  https://www.afdc.energy.gov) 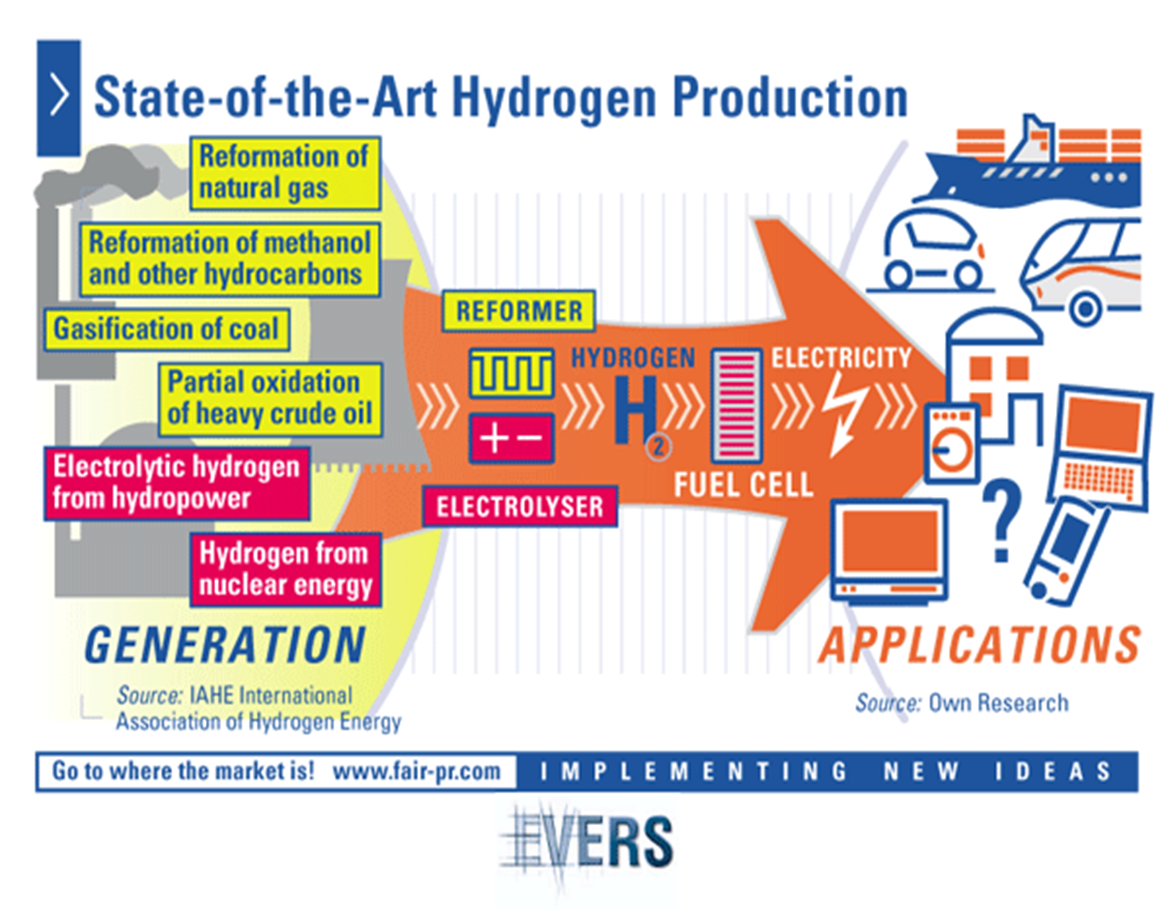 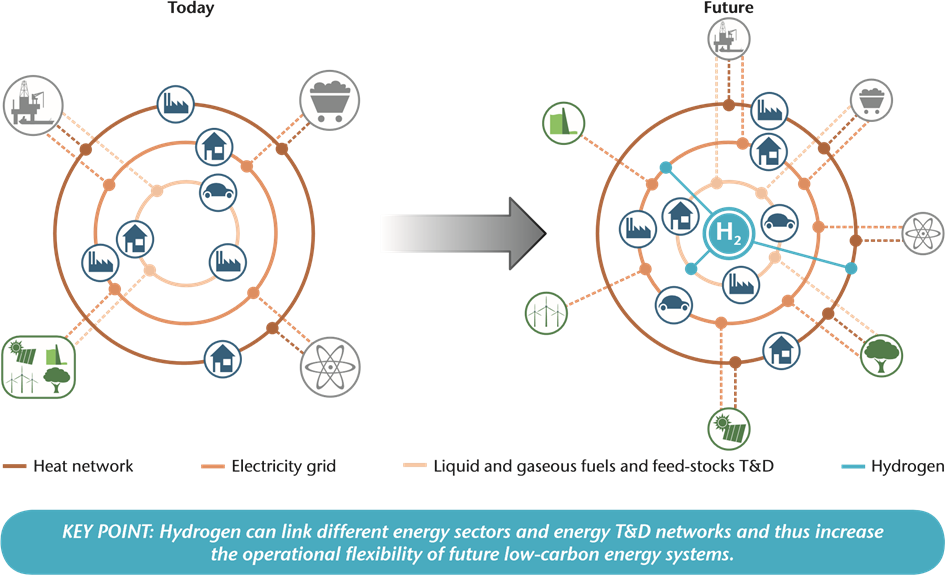 Hydrogen-based energy system aims at transforming the fossil-based energy system towards increasing use of local renewable energy sources and clean technology solutions in end-consuming. The hydrogen and fuel cell technology solutions, already available in the market, enable the implementation of clean energy production and end-consuming in industrial, residential, commercial business and service sectors and in transportation. This view of hydrogen economy or hydrogen society is sometimes argued as hydrogen romanticism. On the contrary, this clean technology developed and brought onto the market offers the solutions to transform the fossil-based energy system and to stop climate warming. This is an option for the actors in the global value chain of hydrogen and fuel cell technology sector. The future energy system utilizing hydrogen as an energy carrier is illustrated below (Source: Technology Roadmap, International Energy Agency, 2015).

Leading areas are Asia and North-America, Europe comes behind as the following diagrams show according to Fuel Cell Technologies Market Report 2016 by U.S Department of Energy, Office of Energy Efficiency & Renewable Energy, in October 2017. 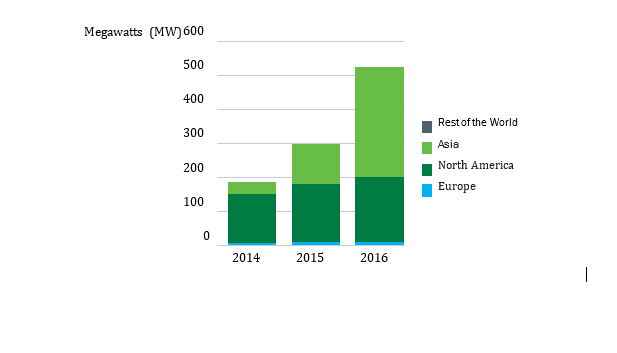 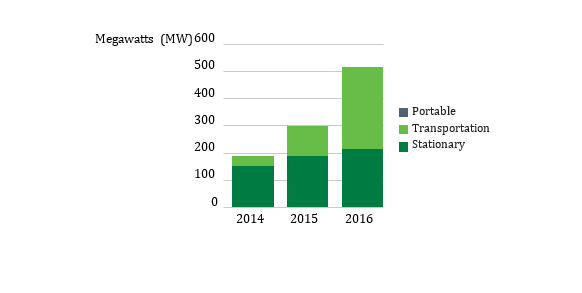 A figure below shows the cumulative number of patents awarded over time through 2016. (Source: Pathways to Commercial Success: Technologies and Innovations Enabled by the U.S. Department of Energy Fuel Cell Technologies Office, October 2017) 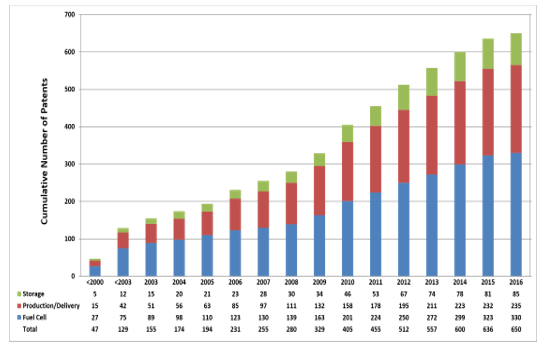 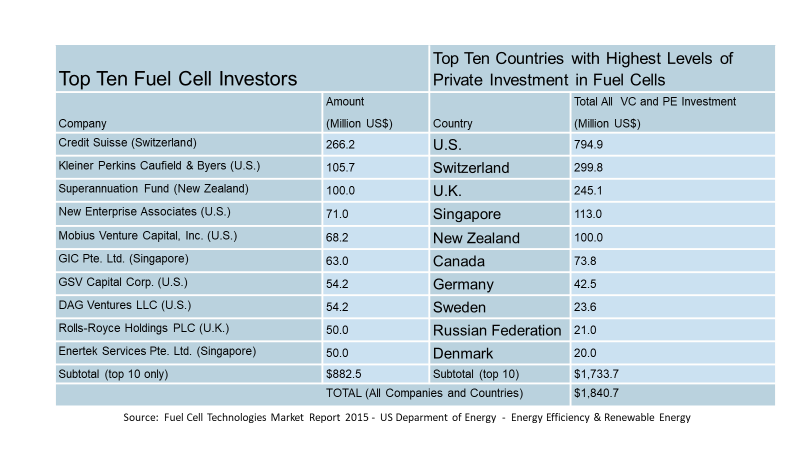 According to the Fuel Cell Technology Office’s (FCTO) programs, USA has a goal and specified objectives to accelerate hydrogen and fuel cell market growth. In FCTO’s view, the largest markets for fuel cells today are in:

Thus, they emphasize strongly in they programs further research and development of applications, in particular, focusing on durability, performance and cost reductions.

Japan has set the target to become the hydrogen-society by 2040.  For example, Japan has a programme to install CHP-units for residential electricity by 2040.  The table below shows fuel cell vehicles Japan has launched in 2015 and 2016. Toyota Mirai and Honda Clarity have sold to California, England, Belgium, Denmark and Germany. With Hyundai Tucson fuel cell vehicle, these FCVs are sold 1000 in USA and in Europe 3000. Sources: USA Energy Department, Energy Efficiency and Renewable Energy, Fuel Cell Technologies, Market Report 2015 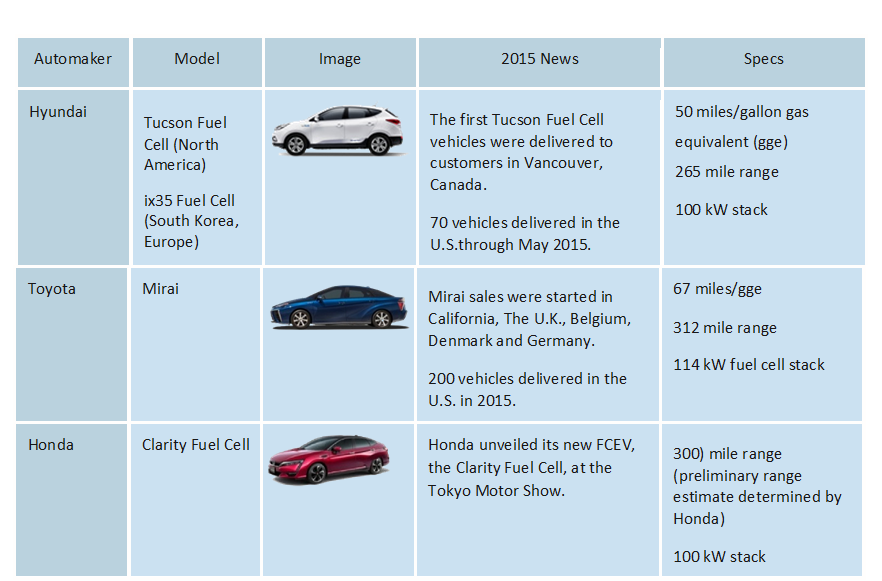 The EU has set the target to be the carbon neutral society by 2050. Important milestones on the way to this are the specified objectives by 2020 and 2030. The 20-20-20 objectives are the following: increase energy efficiency 20%, decrease CO₂ emissions 20% and increase the use of renewable energy sources 20% (from the year 1990) by 2020. Further, 2030 objectives are the following: decrease Green House Gas (GHG) emissions 40%, increase energy efficiency 27-30%, and increase the use of renewables so that it forms at least 27% of EU energy consumption, and the compatibility of the electricity grids will be within EU 15% by 2030. Hence, there is urgent need to transform the infrastructure of the current energy system. Eu directive 2013 of alternative transport fuels necessitates to develop the market for alternative transport fuels and related infrastructure to support them. Key dates to implement this structural change are the following:
Contact Us